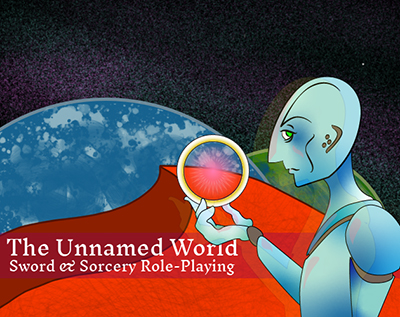 The Unnamed World is building momentum nicely! We’re having a lot of fun with it.

For developing the game, I’m organizing the text into packets. This zip file contains them all, revised from earlier releases and including 3 new packets:

The Synthene packet: Synthenes are artificial people created by the aristoi of a past age, to serve as their bodyguards and companions. Synthenes can be destroyed, but are otherwise immortal, and some have survived into this age. You can be one.

This packet is a whole new character type, with new character creation rules, new experience & improvement rules, and its own unique actions.

The Monster Creation packet: These rules form a branching path you can follow to create a monster, not an exhaustive tree of all the monsters that exist. Don’t limit yourself to these rules when you have a monster already in mind. They help you create:
1. A person.
2. A wild animal or natural super-predator.
3. A person or animal transformed into a monster.
4. A made creature, living machine, or artificial life.
5. A creature of the Unseen World or the World of Death.
6. A kertwk or another alien creature.

I’ve started GMing it! Here are my pointers so far:

We’re going to keep playing, and you’re invited to play too. This is the ground floor! Look it all over, and if you need any answers to help get you started, I’ll be more than happy to answer.